Well, I got lazy. And busy. Lizbazy? Buslazy? Either way, it’s been almost two months now since Tatanka and one month since Pierre’s Hole, so I’m going to mash them up into two-for-one race report!

I shot up toward Sturgis, SD after the Fourth of July and got a ride in the Thursday before at the Bearlodge trail system in Eastern Wyoming. Holy cow was that a good ride! It was challenging for me, as this was basically my first ride at altitude since March. I mentally bonked on the final climb but corrected my negative self-talk by reminding myself that June was a bad month for training (and I knew that going into it).

I knew I was in for a treat (read: torture) when the weather that week started popping up into the 90s. The forecast for race day included a heat advisory and a temperature containing three digits…

This year’s was an all-new course, and the design was a cloverleaf beginning in Downtown Sturgis (if it can be called a downtown anytime but during the motorcycle rally). Marathon racers endured two loops: ~28 miles for the first, ~13 for the second. We started with a 6-ish mile road climb out of town followed by a short descent once we reached trail and another 5 miles of climbing up to the first aid station.

Start time was 0800, and it was already hot. I really wish the organizers would have moved the start times up an hour once it was determined we would be racing in the fires of Mt. Doom…

After draining most of a bottle while cooling down at Aid 1, I refilled and began a pretty sweet descent. With the exception of two short, punchy climbs, this was an all-out 16-mile downhill session through some sweet (if a bit loose) singletrack and road (eventually). It almost made you forget about the heat.

That is…until you got back to town. I popped into Aid 2, which was in town, and they had a single water cooler. Which was empty. How the fuck do you run an aid station that poorly? Especially one that is downtown with water sources all around? I hit the porta-pottie and then stood in the cool misters while waiting for the water to be refilled. This proved to be detrimental, as the heat combined with the Diabetes Table (i.e. sugary snacks at the aid station) broke me down. I shoved a couple of handfuls of sugary crap into my mouth while I waited for water, listening to several racers talk about how they were not going out for the second loop.

Once my water was refilled, I regained some self-control and hit the trail. I had 13 miles left, and I had pre-ridden half the final loop; I knew what I was in for. Yet I did not take into account the fact that I’d see 115 on my Wahoo riding this mostly-exposed loop. I slogged and slogged through those painful 13 miles, getting picked up by some kid who was around 15 and dropped like 1st period Calculus. I got a bit sick to the stomach from my moment of weakness in the face of sugar (but I didn’t hurl).

At least he asked if I was OK as he rode off into the distance.

The final descent of the course overlooks and then passes a cemetary. Quite appropriate, I think.

So I finished (nearly dead), rehydrated (as best I could), had some free (but not great) beer from the local brewery, spaghetti sauce from the complimentary post-race spaghetti dinner, and motored on back down to Colorado.

Let’s recap my goals set forth in the previous post, shall we?

Where did I end up?

That puts me closer to the division winner than I was at the Mohican, but slightly further behind the average. And I didn’t hit my top 40% mark, but given there were only 28 finishers, I’m OK with that.

And so I resolved never to race Tatanka again (unless they change the date…) and moved on to my next race: Pierre’s Hole 100k.

They say a picture is worth a thousand words, so let me just begin with a screenshot of my July training calendar: 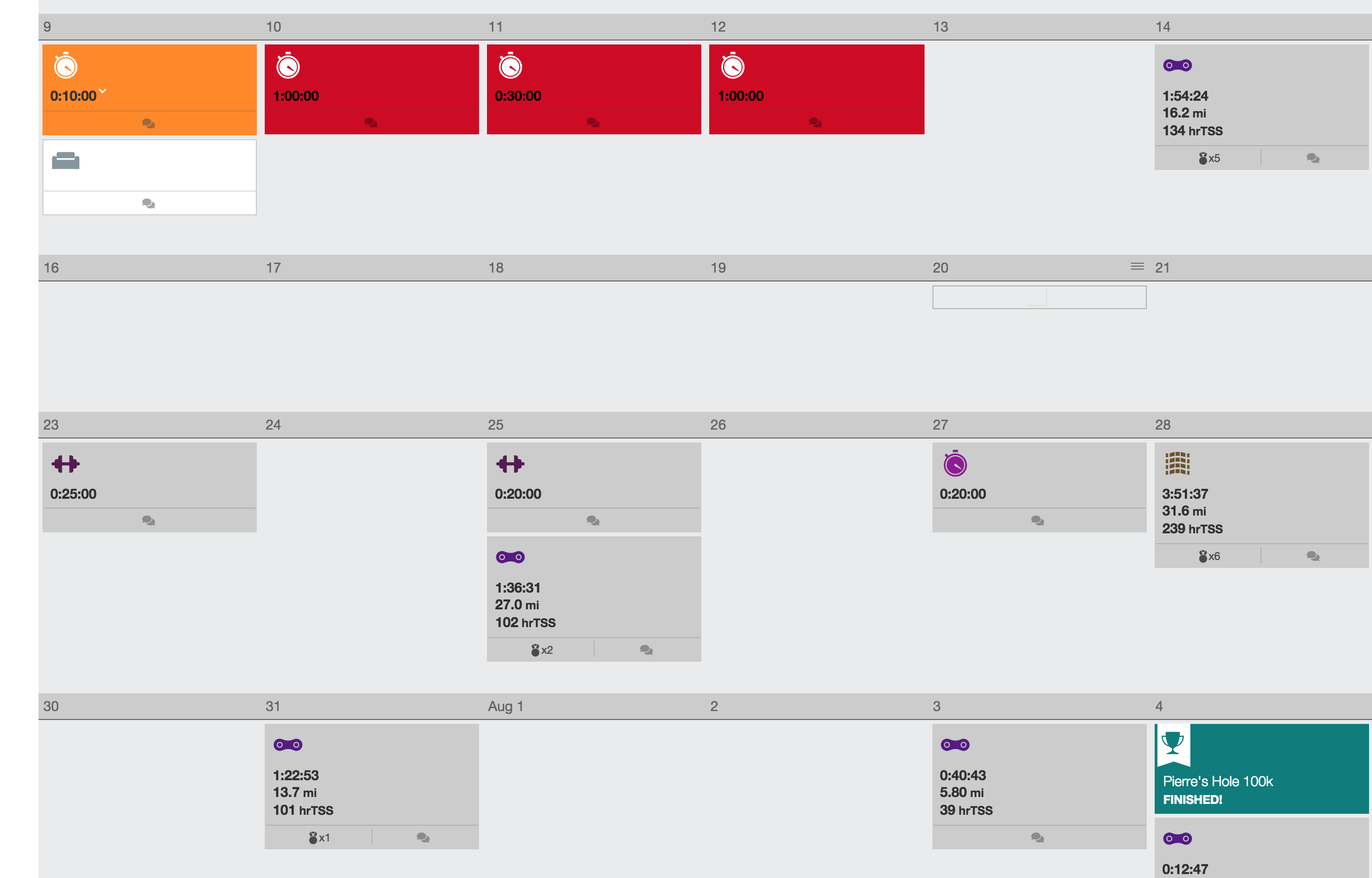 Combine that with the fact that I barely trained any in June, and I think you’ll get an idea of how Pierre’s Hole turned out for me:

I was doomed from the start. The opening climb felt like such a slog. The negative self-talk crept in. I kept getting picked up and dropped on the first downhill section (my cornering NEEDS improvement). Negative self-talk didn’t go away. Legs felt like lead. Oh, and my fucking derailleur began to shit itself and wouldn’t maintain gears 2-4.

I was having a miserable time, and this course was full of amazing singletrack and astonishing views. So I began to dissect the situation. I could fix my derailleur. I couldn’t fix my legs. I could maybe fix my head, but it would be a lot easier with my legs. I tried to just tune into the ride, but I couldn’t get out of my own head. I wasn’t having fun, and that is the first rule of the NUE series.

Endurance racing is as much mental as it is physical.

So I made myself a deal - I allowed myself to DNF, but only after I finished the first lap (half the race). And so I did. And I drank beer and enjoyed a beautiful day at Grand Targhee Resort while everyone else finished the race.

A small sidenote here: I also had a bit of stomach discomort. It was not bad enough to make me want to drop out of the race (it was during my pre-ride on Friday, however), but it was annoying enough to contribute to my decision to drop.

So that’s not terrible. I feared I may have gone too hard on the initial climb, but my results are in line with my previous races, so I feel safe calling this a simple case of racing without training. Case closed. Let’s move on…

Well, I definitely have learned some lessons here:

And so I am now less than a month away from the NUE series finale and my final race of the year: the Big Bear Grizzly 75k. I have my training plan laid out for the next month, and I’ve been following it. I feel better and stronger; I feel like I’ll be ready to lay down a solid performance.

Until next time - see you on the trails!